Throughout Lake Minear’s history, witnesses have claimed to see a strange creature inhabiting its’ depths. And while skeptics have claimed that these sightings are misidentifications of floating logs, waterfowl or simply the diseased imaginings of a webmanager who should have something better to do, to true believers the monster is a very real and much beloved part of the lake’s history.

The Nature of the Creature:

Descriptions of the monster have varied widely over the years. The Lake Minear monster has been variously described as resembling a prehistoric sea creature, a massive duck, a large snail and a particularly angry set of bagpipes. It has been witnessed by countless citizens, photographed, tracked on sonar and sighted from the air (famously, when Gyrocopter Pilot Phineas Gregg saw the creature in 1949, he was so overcome with awe that he forgot to keep track of his fuel, and was forced to make an emergency landing in a nearby field that bears his name to this day).

Historically, Minnie had fed mainly on ducks, geese and Northern Illinois Lake Gazelles (which are now extinct due to Minnie’s predation). Unfortunately, a young swimmer with a floatie looks very much like a lake gazelle from underwater, which is why Lake Minear Lifeguards keep small children with floaties confined to the shallows. Minnie is also believed to snack on the occasional trespassing teenager at night, which everyone is pretty much OK with.

The earliest documented report of a monster in Lake Minear dates from 1887,when prominent local haberdasher Ignatius Codswallow witnessed a strange creature swimming in the lake when he was departing the Island Tap, which at the time was on Oak Spring Road (it would not drift to its’ current location until the mid 1970s). He described what he saw as “A most terrible beastie, long-necked and fearsome, with the hideous beak of a duck”, which caused many ladies of the time to faint- although, to be fair, it didn’t take much in those days to make people faint. Skeptics have cast doubt on his claim, some pointing out that Codswallow was a notorious absinthe aficionado, and others noting that the lake would not exist for another 70 years.

Lake Monster sightings picked up considerably after the lake was actually created, with dozens of sightings in the late forties. The now-infamous “Orthodontists’ Photograph” was taken around this time, but was later determined to be a hoax created with a conch shell, a small trolling motor, a stuffed duck and a dozen trained walleye. A group was formed in 1956 to find evidence proving the existence of the monster. They named their organization the “Libertyville Society for Investigation of Matters Cryptozoological” , but after being informed that they would be charged by the letter to have their official stamp made, they shortened the name to “Libertyville Boat Club”.

It was around this time that the rivalry between the two sides of the town began, with residents west of Milwaukee referring to the beast as “Neary”, while east side residents preferred the name “Minnie”. Street fights between the West Side Nearies and the East Side Minnies were commonplace throughout the 50’s, but in the fashion of the time most rumbles were musical in nature, with more choreographed snapping than actual fighting. 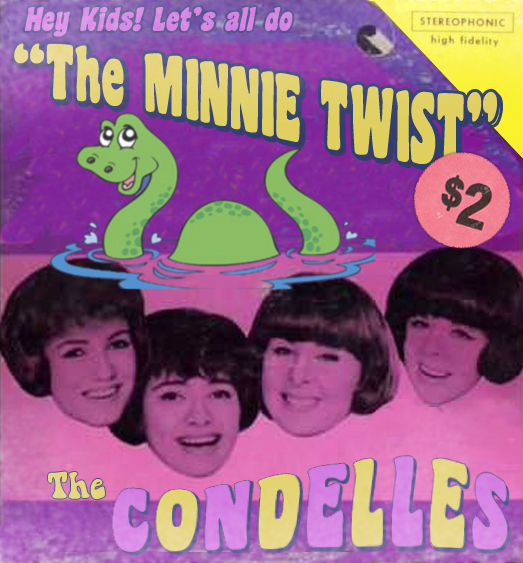 The Lake Monster craze reached its’ peak in 1962, with so many sightings that the creature even inspired a minor radio hit (“The Minnie Twist”, by the Condelles), which reached 211th on the Novelty Record Charts that year. There was even a brief petition drive to change the name of the town to honor the creature, but the two sides of the town could not reach an agreement, the name “Nearyburg” being deemed too awkward, and the name “Minneapolis” having been taken already.

Sightings fell off for a time, with only a handful of claims being reported over the next five years. There was a brief rash of sightings in the summer of 1968, which makes perfect sense to anyone who remembers the summer of 1968. During the infamous “Lake Minear Summer Solstice Aquarian Hug-In” concert in July of that year, many in attendance reported seeing the creature, resulting in many harshed mellows. 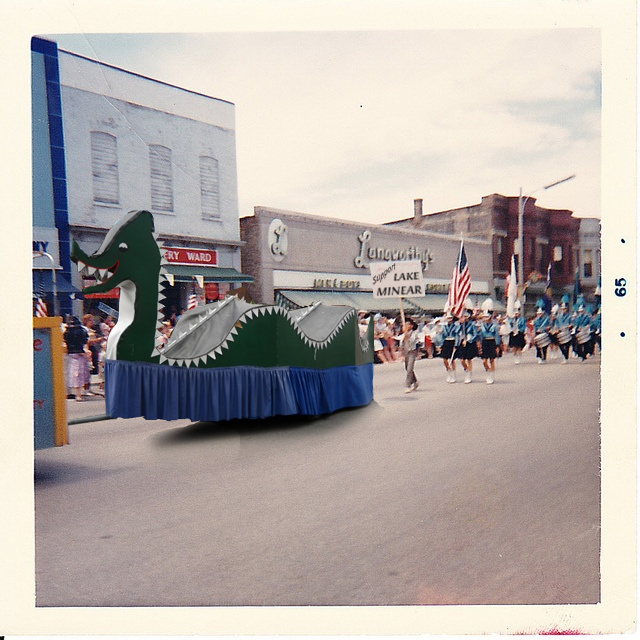 Sightings have continued steadily right up until today, with a few new reports coming in every summer, but “Monster Fever” has gradually faded from the town’s memory. The traditional “Monster Days” celebration every summer was changed to “Libertyville Days”, and the “Little Miss Monster” pageant was renamed as well. Townee Square Restaurant still offers their “Lake Monster Breakfast Platter”, but only by special request, and only when pickled eels are in season. Even Mickey Finn’s famous “Minnie IPA” had to be discontinued when they moved across Milwaukee Avenue, and the name became unacceptable.

Still, many long-time Libertyvillians fondly recall the heyday of Lake Monster sightings, Famed musician, record label owner and Libertyville native Tom Morello has been quoted as saying “There’s something in the water in my hometown of Libertyville…”, and while some claim that he was referring to Ike Reilly and our other musically talented natives, others consider this a veiled reference to Minnie (or Neary, depending on which side of town Mr. Morello hails from).

So next time you’re wiggling your toes in the sand at Lake Minear Beach, enjoying a delicious Ring-Pop, keep an eye peeled on the horizon…you might just catch a glimpse of our very own monster! And if you’re not a member yet, now’s a great time to sign up for a summer membership, and start your monster-hunting career!